Themes and Events
* At the beginning of 1950 our family ages were: Dad, Robert Pierce, twenty eight; Mom, Hazel May (Shafer), twenty seven; Larry, seven and a half; sister, Linda, three and a half years old.
* In this year, the U.S. population was an amazing 150,697,361, while the world’s population was 2.52 billion; and this in a time when no one thought in terms larger than a few thousand or perhaps a million.
* Antihistamines become available to the public and are hailed a new medical miracle.
* Diner’s Club introduced the first credit cards. Maxwell House introduces “Instant Coffee”
* During this year there were 49,000,000 motor vehicles on US highways, in 1960, just ten years later, the number had increased 45% to 71,000,000.
* Tax Freedom Day is creeping further and further into the calendar, it fell on 13 February 1930 and 8 March 1940 and now 3 April 1950. Tax Freedom Day is the date on which American workers get to keep all of their earnings, assuming all the money made before this date goes to paying federal, state and local taxes.

Good times in America, suburbia grows
A house building binge, that grew from the housing shortage at the close of World War II, created peripheral towns or bedroom communities around the nations major cities.  As our more affluent citizens moved, so did the stores and shops, thus creating a ever growing problem for tax supported services in the city.  As the cities tax base eroded, services were reduced and welfare and crime increased amongst the poor who were left behind.

Meanwhile, as the suburbs grew, a variety of new shopping and entertainment institutions mushroomed, including: 1) Shopping Malls, which were groups of stores usually anchored by one or more major national chain stores, i.e. Sears & Roebucks, Penny’s, Woolworth… 2) Chain Super Markets began to spread in earnest, eating up the small, neighborhood, ‘Mom and Pop’ stores. 3) Drive In movie theaters, where you could take the family, sit in your car and watch two thrilling movies for a little more than half the price of going “indoors” for a movie. 4) Bowling Alleys, where families, friends and “leagues” spent their Friday or Saturday night rolling the ball and chatting.
The ’50s were a good time for middle America.  Family incomes climbed, people found they had more time and money for recreation.  “Planned obsolescence” became a catchword; and while  automakers promoted it by changing automobile styles annually, women’s fashions followed with seasonal style changes. 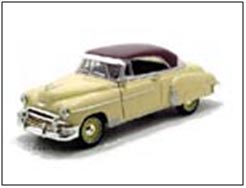 Our family’s new Chevrolet
Mom and Dad bought a Chevrolet Deluxe, our family’s first new car. It was a two tone auto with black roof and yellow bottom sides. The model had two doors,  manual transmission and AM radio.  I remember the day Dad brought the car home and promptly took the family for a ride.  We drove from Coloma to Waterveliet, all the while talking about the car and looking out the windows with great pride.  My parents had this car during the years I was growing up and infact still had it, as their only means of transportation in 1963, when I was discharged from a three year enlistment in the Army (13+ years)!

The Service Station becomes a Gas Station
In the early 1950s, the personal service a customer received from the gas station attendant was very different world from the “self service” island gas station concept that developed in the late 1970s.
During the early ’50s, when a customer drove into a gas station, one or two  attendants, one who was usually the owner or manager, came hurrying to your car from the station office wearing in a white uniform and a cap..  While one attendant inquired as to how much gas you intended to purchase, the other went around the car checking tire pressures.  While the former pumped the gas, the latter raised the engine hood and inspected the oil level and radiator water level.  If fluid levels were low or if any belts were appreciably loose, or worn, the customer was advised of the condition.  Finally, while one service worker collected the bill, the second washed and squeegeed the front and occasionally the rear windows. That was ‘service’ and it was a service that was taken for granted, until it disappeared essentially overnight with the Arab oil embargo and the resultant gasoline price hikes of the mid 1970s.
Also, until the early 1960s, every gasoline station had a metal rack in the office filled with fanfolded, regional state highway maps. The maps were free to all customers.  By the 1980s state maps disappeared from the gas stations, after this they were found in book stores and later yet in “convenience stores”  for $1.50 to $3.00 each.

McCarthyism: The Communist witching
During President Harry Truman’s term in office, a Communist witch hunt caught the mood of America.  Don’t ever believe such things can’t happen in ‘modern’ America.  People are people everywhere in the world, when group or national passions rise, ‘witch hunts’ and other persecutions can take place.
Joseph McCarthy, a Republican Senator from Wisconsin,  led American politicians on a broad search for “Pinkos, Com-symphs (Communist sympathizers), Reds (as in Red Chinese Communists), and Commies (Russian or East Block communists), inside our national boarders.  U.S. Government employees, scientists, teachers, actors, TV personalities, writers and even clergymen lost jobs because of accusations made by unknown informants.
The rule that a man was innocent until proved guilty was replaced by one that considered him guilty until he could prove his innocence.  All the harassment and publicity on radio, TV and on the newspapers resulted in a small number of people actually being “blackballed’ from their professions. The episode made McCarthy a famous public figure for a few years. Then, like other big news events, the witch hunt lost steam.  Television series, such as “I Was A Communist”, lost ratings.  Before long, people put the whole affair behind them. Today, this once vital and exciting chapter of American history, perhaps a little too conveniently, has been all but forgotten. 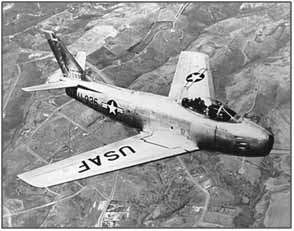 In September, the United Nations recommended military action be taken against North Korea.  In September, US troops led by General Douglas MacArthur landed in South Korea. The Korean War or so called “Police Action”,  was begun. General MacAurthur was eventually successful in pushing the North Koreans back above the 38th Parallel.  He demanded that President Truman allow him to continue his assault and take North Korea. At this point, Mao Tse-Tung, leader of Communist China came to the aid of North Korea. (Image at right is the new F86 propeller-less jet, used in Korean combat.)

Finally, MacAurthur’s policy of trying to force an attack on North Korea brought him into personal conflict with President Truman, his Commander and Chief.  MacAurthur carried on his own political campaign trying to enlist Congress and the American people to back his view.  By doing so he overstepped his authority and was dismissed from military command by President Truman. At his retirement speech, MacAurthur told Congress and the American people, “… Old soldiers never die,  they just fade away.”
As a result of China’s tough policy toward the USA and our refusal to carry the Korean conflict to a decisive conclusion, the nations of Southeast Asia began to view the United States as a “paper tiger” while China’s influence as a world power grew.