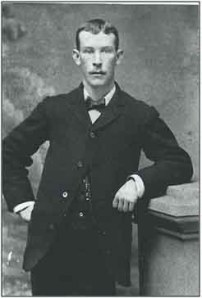 A Blacksmith.{D1}  “…For many years he was a blacksmith for the Old Central Ohio railroad, now the B. & O. and is probably the last surviving workman on that line in this vicinity.”{D5}

[Photo: 1906 a new railroad blacksmith shop, this would have been ‘state of the art’  and about 10 years after Edward retired.]

PHYSICAL DESCRIPTION:
1864 US Army records describe Edward at, “Age 33, 5 feet 9 inches in height with a dark complexion, gray colored eyes and dark hair.” {D2} A photograph of Edward from ca 1855 at about 25 years of age shows he is combing his hair forward probably to cover thinning, which is seen on the sides of the temples. By ca 1878, at about age 48, he is rapidly becoming bald on top while maintaining hair growth

around the sides. Edward was a well groomed, slender man with trimmed hair and a short mustache, which he carried for at least several decades. In the two photographs that the family has, Edward is seen well dressed in quality clothing.{D6}

On 13 May 1864, Edward enlisted as a Private in Company I, 170th Regiment Ohio National Guard Infantry at Bellair, OH. His period of enlistment was for 100 days. {D2} “…It  (the 170th Regiment) was mustered into the United States service on the 13th of May, at Bellair, OH and on the 17th it left for Washington city, but being detained by the destruction of the bridge at Harper’s Ferry, it did not reach its destination until the 22nd…On the night of 4th of July it left the defenses of Washington and proceeded to Sandy Hook, MD where it was engaged in skirmishes… the regiment took part in the advance made by General Sherman up the Shenandoah Valley…was detached and ordered to Harper’s Ferry as escort to a supply train…” The regiment was returned to Ohio and was mustered out 10 Sep 1864.{D3}

PHYSICAL APPEARANCE:
A ca 1868 photograph of Mary Ann when she was about 33 years old shows a well dressed, but rather plain woman with deep set eyes. Her dark hair is parted in the center and has long bangs which were curled and combed to either side of her face. She appears to have been short standing perhaps 5′ to 5′ 4″.{D3}

Filed under My family in history, __2. Settlers and Migrants