The lower respiratory tract is the part of the respiratory tract below the vocal cords. While often
used as a synonym for pneumonia, it also includes acute bronchitis.
http://en.wikipedia.org/wiki/Lower_respiratory_tract_infection 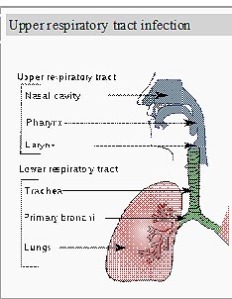 Signs and symptoms
Acute upper respiratory tract infections include rhinitis, pharyngitis/tonsillitis and laryngitis often referred to as a common cold, and their complications: sinusitis, ear infection and sometimes
bronchitis (though bronchi are generally classified as part of the lower respiratory tract.) Symptoms of URI’s commonly include cough, sore throat, runny nose, nasal congestion, headache, low grade fever, facial pressure and sneezing. Onset of the symptoms usually begins 1–3 days after the exposure to a
microbial pathogen. The illness usually lasts 7–10 days.

Group A beta hemolytic streptococcal pharyngitis/tonsillitis(strep throat) typically presents with a sudden onset of sore throat, pain with swallowing and fever. Strep throat does not usually cause runny nose, voice changes or cough.

Pain and pressure of the ear caused by a middle ear infection (Otitis media) and the reddening of the eye caused by viral Conjunctivitis are often associated with upper respiratory infections.

Cause
Over 200 different viruses have been isolated in patients with URIs. The most common virus is called the rhinovirus. Other viruses include the coronavirus, parainfluenza virus, adenovirus, enterovirus, and respiratory syncytial virus.

Up to 15% of acute pharyngitis cases may be caused by bacteria, commonly Group A streptococcus in Streptococcal pharyngitis (“Strep Throat”).

Influenza (the flu) is a more severe systemic illness which typically involves the upper respiratory tract. Influenza is a relatively uncommon cause of influenza-like illness.

Treatment
Treatment depends on the underlying cause. There are currently no medications or herbal remedies which have been conclusively demonstrated to shorten the duration of illness.Treatment comprises symptomatic support usually via analgesics for headache, sore throat and muscle aches:

There is no evidence to support the age-old advice to rest when you are sick with an upper respiratory illness. Moderate exercise in sedentary subjects with a URI has been shown to have no effect on the overall severity and duration of the illness. Based on these findings, it was concluded that previously sedentary people who have acquired a URI and who have initiated an exercise program may continue to exercise. Getting plenty of sleep; however, is advisable since even mild sleep deprivation has been shown to be associated with increased susceptibility to infection. Increasing fluid intake, or “drinking plenty of fluids” during a cold is not supported by medical evidence, according to a literature
review published in the British Medical Journal.

Antibiotics
Judicious use of antibiotics can decrease unnecessary adverse effects of antibiotics as well as out-of-pocket costs to the patient.
But more importantly, decreased antibiotic usage will prevent the rise of drug resistant bacteria, which is now a growing problem in the world. Health authorities have been strongly encouraging physicians to decrease the prescribing of antibiotics to treat common upper respiratory tract infections because antibiotic usage does not significantly reduce recovery time for these viral illnesses. Some have advocated a delayed antibiotic approach to treating URIs which seeks to reduce the consumption of antibiotics while attempting to maintain patient satisfaction. Most studies show no difference in improvement of symptoms between those treated with antibiotics right away and those with
delayed prescriptions. Most studies also show no difference in patient satisfaction, patient complications, symptoms between delayed and no antibiotics. A strategy of “no antibiotics” results in even less antibiotic use than a strategy of “delayed antibiotics”. However, in certain higher risk patients with underlying lung disease, such as chronic obstructive pulmonary disease (COPD), evidence does exist to support the treatment of bronchitis with antibiotics to shorten the course of the illness
and decrease treatment failure.

Alternative medicine
The use of Vitamin C in the inhibition and treatment of upper respiratory infections has been suggested since the initial isolation of vitamin C in the 1930s. Some evidence exists to indicate that it could be justified in persons exposed to brief periods of severe physical exercise and/or cold environments. The benefits versus risk of nasal irrigation are currently unclear and therefore is not recommended.
. 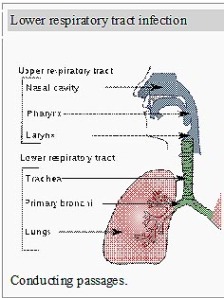 Causes
•  Pneumonia can be caused by bacteria, viruses or fungi, and can follow acute or chronic bouts of bronchitis. It is also possible to get pneumonia by accidentally inhaling a liquid or chemical.
Transmission of pneumonia from person-to-person through direct contact with infectious secretions can occur, however most infections are not caught from another person but are a product of a weakened immune system. Hospital patients are at an especially high risk of pneumonia.

A bacterium is the most common cause of pneumonia in adults and children over the age of three.
Bacterial pneumonias tend to be the most serious and among the elderly can be brought on after influenza or the common cold.

•  Bronchitis, which is an inflammation of the main air passages to the lungs, is generally caused by viral respiratory infections. The main cause of chronic bronchitis is cigarette smoke, or long-term exposure to secondhand smoke. The affliction usually clears up on its own, but it can lead to
pneumonia in some severe cases.

Symptoms
Pneumonia has similar symptoms to a cold or the flu at its onset, with a cough and fever. The main signs and symptoms are often shaking, chills, a high fever, sweating, shortness of breath, chest pain, and coughing greenish or yellow phlegm.
Additional symptoms can include headache, excessive sweating, loss of appetite, excessive fatigue and confusion, especially in the elderly.

Classification
1)  Bronchitis – Bronchitis can be classified as either acute or chronic.
Acute bronchitis can be defined as acute bacterial or viral infection of the larger airways in healthy patients with no history of recurrent disease. It affects over 40 adults per 1000 each year and consists of transient inflammation of the major bronchi and trachea. Most often it is caused by viral infection and hence antibiotic therapy is not indicated in immunocompetent individuals. There are no effective therapies for viral bronchitis. Treatment of acute bronchitis with antibiotics is common, but controversial as their use has only moderate benefit weighted against potential side effects (nausea and vomiting), increased resistance, and cost of treatment in a self-limiting condition. Beta2 agonists are sometimes used to relieve the cough associated with acute bronchitis. In a recent systematic review it was found there was no evidence to support their use.[6]
Chronic Bronchitis are frequently due to non-infective causes along with viral ones. 50% of
patients are colonised with Haemophilus influenzae, Streptococcus pneumoniae or Moraxella
catarrhalis. Antibiotics have only been shown to be effective if all three of the following symptoms are present:- increased dyspnoea, increased sputum volume and purulence. In these cases 500 mg of Amoxycillin orally, every 8 hours for 5 days or 100 mg doxycycline orally for 5 days should be used.

2)  Pneumonia
Pneumonia occurs in a variety of situations and treatment must vary according to the situation.  It is classified as either community or hospital acquired depending on where the patient contracted the infection. It is life-threatening in the elderly or those who are immune-compromised. The most common treatment is antibiotics and these vary in their adverse effects and their effectiveness. Pneumonia is also the leading cause of death in children less than five years of age.
The most common cause of pneumonia is pneumococcal bacteria, Streptococcus pneumoniae accounts for 2/3 of bacteremic pneumonias. A dangerous type of lung infection with a mortality rate of around 25%. For optimal management of a pneumonia patient the following must be assessed;- pneumonia severity (including where to treat e.g. Home, hospital or intensive care), identification of causative organism, analgesia of chest pain, the need for supplemental oxygen, physiotherapy, Hydration, bronchodilators and possible complications of emphysema or lung abscess.

For community acquired respiratory infections the appropriate use of fluoroquinolones is a
therapeutic option. These have been demonstrated to have targeted in vitro activity against both the typical and atypical pathogens of interest. The newer fluoroquinolones (e.g., moxifloxacin or gatifloxacin) have extended gram +ve activity and once daily dosing and hence are potential first line in the treatment of lower respiratory tract infections. However it is clinical response that is the best indicators of efficacy and moxifloxacin or gatifloxacin have been proven to be effective against community acquired respiratory tract infections clinically.

Medication Choices
Although experts differ on their recommendations, the first antibiotic used is usually one that kills a wide range of bacteria (broad-spectrum antibiotic). All antibiotics used have a high cure rate for pneumonia.6

If you do not have to go to the hospital, your doctor may use any of the following antibiotics:
•  Macrolides, such as azithromycin, clarithromycin, and erythromycin.
•  Tetracyclines, such as doxycycline.
•  Fluoroquinolones, such as gemifloxacin, levofloxacin, and moxifloxacin.

The mainstay of non pharmacological treatment for many years has been rest and increased fluid intake. Doctors and other health professionals  recommend extra fluid intake. Although the idea of replacing fluids lost through fever and rapid breathing was sound, some observational studies reported harmful effects such as dilution of blood sodium concentration leading to headache, confusion or possibly seizures. Rest will allow the body to conserve energy to fight off the infection.

Complementary Therapies
Chickweed taken orally has been used for many years to reduce fever and phlegm associated with bronchitis. It is believed to act as an expectorant and although the pharmacological actions of several
constituents suggest it may be useful, controlled studies are not available to confirm its effectiveness.

Thyme is approved in the treatment of bronchitis and there are encouraging data for its use in
chronic bronchitis when used in combination with other herbs, however there is no stand-alone data.

The use of Vitamin C is commonly thought to act to prevent colds and other respiratory infections.
However according to a recent Cochrane review the evidence is too weak to support its widespread use as a prophylactic in preventing pneumonia in the general population. It may be reasonable to use in high risk patients with low plasma levels of vitamin C due to its low-cost and risk associated with is use.[25] Vitamin C used as an orthomolecular antibiotic, is most effective when used in the same way; i.e., on timetable dosages.

Vitamin A has been successfully used to reduce the mortality and severity of respiratory infection
with measles. However in a review of non-measles pneumonia it was not found to have any benefit or harmful effects.

Filed under Survival Manual, ___b) Disease