TRAVEL:
William, his wife Hannah and family, moved to Deep River area of Guilford County, NC in 1778. William’s brothers John and James and their families were also part of the small migration of Nichollites who removed to NC.{D11}

EVENT:
During the 1790s, with the death of many of the original founding members, the Nicholites began merging with the Quakers. About 1801 or 1802, with the dissolution of the Nicholite religious group, William, brother John and their families moved toOhio.

HISTORICAL NOTE:
The first white settlement in the Ohio was in 1788, at Marietta. In the same year a settlement was also established at Cincinnati. During the next few years other villages sprang up, particularly in the south.

HOME:
William purchased 51 acres of land from Josiah Hunt and 11.5 acres from Edward Mercer in 1804.  He bought a 90 acre parcel from Richard Mendenhall in 1818. All of the land records refer to the lands as being “on the waters of Caesars Creek”, but no survey location was given on any of them. {D14}  “William and John Horney settled early on the farm now (the author wrote this in 1881) owned by Amos Williams. John devoted himself to hunting and shooting the game which was here in abundance.”{D2} In 1807 an enumeration of white males in Xenia Twp., Greene Co. OH above the age of 21 years was taken, among those recorded were the familiar names: James Anderson, William Anderson, John H. Anderson and William Horney…{D9, p.28-30}

LIVELIHOOD:
He was a planter and farmer.

WILL:
William made his Will on 6 April 1817. The disposition of his property is as follows:
Daniel was to receive 80 acres on Sugar Creek;  Chipman would get 120 acres on Sugar Creek also a bed and furniture;  Jeffrey, he Willed, “I give unto my son ♥ Jeffrey Horney my homeplace , one waggon &
gears One Dark bay mare, eight years old, and one cow and calf and the ballance of the bedding to be left to said Jeffry”; the balance of the estate to be divided amongst daughters Mary, Lydia, Hannah and Sarah.  Sarah, one horse and saddle, bed and furniture, cow and calf, spinning wheel.
Hannah, a bed and furniture. John, a bed and furniture. Margaret’s children $1.00; Paris’ children $1.00.  James $1.00; Deborah $1.00; Mary $1.00; Lydia $1.00; William $1.00.{D12}

BURIAL:
William was buried in the old Pioneer Cemetery, 1/4 mile north of Bellbrook’s modern cemetery. William and Harriet’s grave markers are not amongst those that have survived to the present. A grave stone for William was erected in the modern Bellbrook Cemetery noting William as a Patriot in the American Revolution. His monument sits directly in front of the cemetery flagpole.{D10}

“A very interesting sect which saw its rise in the rural area along the Delaware-Marylandboarder in the 1760s owed its existence to Joseph Nichols. A native of  Delaware, he was born near Dover about 1730 and engaged in husbandry in Kent county, Delaware. Nichols received very littleformal education but is said to have been “endowed with strong powers of mind and a remarkable flow of spirits”.

After 1764, Nichols bought 224 acres in Mispillion Hundred on the south side of Ivy Branch, in Kent County. “Joseph Nichols humor, vivacity and ability to amuse others made his company much sought after by the young people of his neighborhood so that Sundays he was frequently the center of a crowd. At these and other times, Nichols often entertained his friends with anecdotes and songs. During one such pleasant gathering,” where they met together for merriment such as dancing, etc, he was accompanied by a very particular and intimate friend, who was taken ill and died suddenly at that place.

As Joseph reflected on the circumstance, it was made the means of producing a radical reform in his life and conduct. Nichols became convinced that he and his friends should read a portion of the Scripture whenever they met. Out of the respect his neighbors had for him, they agreed. With the passage of time these gatherings were transformed from scenes of “mirth,’ to seasons of serious thoughtfulness.” Nichols genius in friendship enabled him to move many of his friends and acquaintances along with him on his religious pilgrimage – so that “as he became more circumspect’ in appearance, behavior and conversation, so did they.”
As the Nicholites ministry developed, Joseph Nichols was thusly described, “He appeared to me to be between thirty and forty years of age. In stature, he was about middle size, dressed very plainly, principally in undyed clothes.”

Observers were struck by the similarity between the Nicholites and the Quakers, when asked about this a Nicholite would say, “We Do profess and Confess the same principles that the Quakers Doth, but for Some reasons which we Could render if requested, we hither to have not thought it best to Joyn Membership with them.”
The basic beliefs of the Nicholites and Quaker religions were essentially the same: there was emphasis on the inner light, pacification, simplicity, plainness, and opposition to a “hireling ministry”. Joseph Nichols taught his followers that, just as in the case of the first century Christians and their own Quaker neighbors, they should avoid going to court to settle their difficulties.
The Nicholites came to oppose war and slavery, “believing that war came from the basic causes a slavery-luxury and desire for selfish.”

Joseph Nichols work was cut short by his death in bed in December 1770, while still a young man. Though his religious career was a relatively short eight years, the work he accomplished was destined to continue long after the man ceased to be.

About the time the Society was organizing in Maryland, a number of Nicholites left their homes and moved southward. Among the reasons for their movement were the unsettled conditions in the years after Joseph Nichols death, problems arising from the religious establishment, the availability of news and cheap southern land and other factors.

It is unknown exactly when the idea of starting a new life in another section of the country occurred, but it may have been ♥ Paris (Perez) Chipman of Kent County, Delaware, who provided the inspiration and guidance for this migration. Chipman was one of the first Nicholites to leave the Maryland-
Delaware are whereupon he and another settler bought 640 acres in Guilford County, North Carolina in 1775.

Almost all the land grants made to the Nicholites were located on Deep River, Wolf’s Island Creek, Reed Fork, Matrimony Creek and Haw River and had entered claims by the end of 1778. 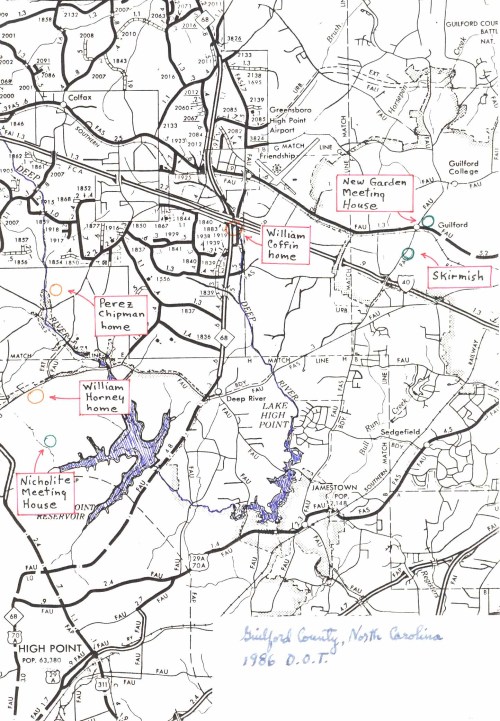 [Map: Guilford County, NC, 1986 Deptartment of Transportation. The original source map for locating these ancestor home was a Guilford County, North Carolina 18th Century Historical Documentation Map. The 18th Century map (the 1700s) shows the home locations of settler/farmers over the entire county, streams, Colonial roads. printing on the colonial map was too small to read in this reduced blog space.] See also my Genealogy/William Coffin post, for additional details

“…the Quaker minister, Job Scott, visited the Nicholites of Deep River at their meeting house in October 1789. The date of the erection of this meeting house is not known, but approximate location can be determined from Guilford country deeds.

Israel’s Creek is now known as Hiatt’s Branch and flows east into Oak Hollow lake along the present northern city limits of High Point. One of the forks of this creek, which flows south through Oakview Estates subdivision, is now known as Horney’s Branch and is the “Israel’s Cree” referred to in the deed for the Nicholite land. The Nicholite Meeting House would then have been located on Horney’s Branch about 2000 feet upstream from it junction with Hiatt’s Branch.

[The drawing above was made of the New Garden Meeting House in 1859, and photocopied from The Pictoral Field Book of the Revolution, copr. 1859, by B.J. Lossing, Published in 2 volumes by Harper Brothers.

On 25 October 1797, some eighty Nicholites petitioned to join the Society of friends, among these were James and wife, Celia Anderson. The petition was presented to members of the Marshy Creek Preparative Meeting near what is now Preston, Maryland.

“The Nicholites had only a brief existence. The “New Quakers” became Quakers, so that few traces of the old movement remains. Knowledge of the Nicholite Society has become such a fading tradition in the areas where the Society once waxed strong, that many who were born and have grown up in these localities have never heard of this unusual sect which once flourished on the Delmarva Peninsula and which gave birth to the two smaller bodies in North and South Carolina.

Mant Probate records, wills and administration records,  as seen below, can be found in : Calendar of Kent County, Delaware, Probate Records, 1680-1800 (Dover 1944).