Themes and Events:
* The CB (Citizens Band) radio make a transition from the “big 16 wheelers” to the family car.
CB antennas become common sights, extending up from the family car and pick-up truck, while driving becomes a “10-4 Good Buddy” experience.
*  Tandy Corporation and a small enterprise known as, Apple, market the first personal computers. Sales are not great the first year, but the excitement has begun.
* The short hair style displaces long hair on many women, as fascination with the hippie styles continue to fade. A new category of book, Harlequin Romances, all aimed at lonely women emerge to find a neglected, ripe and hot market. Personal ads — the kind aimed at securing romance in all its different forms — begins showing up in periodicals.

Waste Water Treatment Training
As construction of Landy Packing Company’s  wastewater treatment plant was entering the final phases, the company registered me in a the Area Vocational Institute’s, ‘Fundamentals of Waste Water Treatment’ course. This was normally a two year curriculum, however, with my college education, work experience and in particular the experience gained from helping install the pumps, pipes, etc. at the Landy facility, I was able to skip all the course work except a single core, ‘Waste Water Treatment’ class. The class met four hours, one evening each week, during the Winter Quarter. 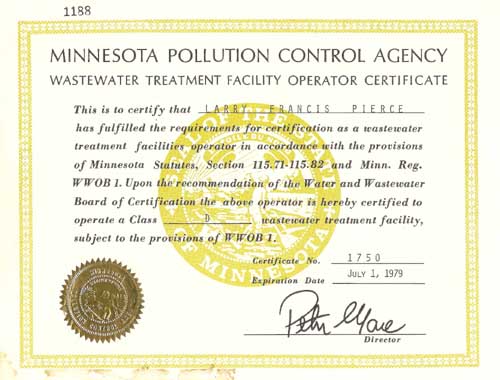 How to ‘ask’ for a raise
Ever since the water plant began construction, Max Landy, co-owner of Landy Packing would occasionally stop at the facility to check on progress, and to see who was working or loafing on the job, etc.…Max was a older man in his mid sixties, of  Jewish descent, a person with a rather acidic nature. He was quick to berate anyone, with words and body language. He was brimming with sarcasm and always ready to say something negative to one person, about another person who was also standing in his presence.

I learned early, that Max and some of his extended family, who were company officers, understood one thing — strength. They would ‘walk on’ anyone who appeared weak, cheerful or optimistic; they respected scowls, abrasiveness, and cold treatment. That’s what they gave and what they expected in return from they’re employee relationships.

And so, while the plant was being built, Max told me, (paraphrased), “… Don’t expect a raise until the plant’s in operation…until that time you’re only doing labor and not worth any more to me than labor…if you don’t like it, get a job somewhere else.” I already knew the culture and attitude of the business, his statement wasn’t aimed at me as, Larry, it’s what he would have told anyone and probably often did. Being a quick study, I just smirked, swore under my breath, and went about my work…waiting.

We ran operational tests for a couple days while the factory equipment installers stood by observing and tweaking their machinery. Then, seeing everything worked properly, they left.
The construction crew likewise packed the last of their equipment and pulled out.

On the morning that the wastewater treatment plant officially came online., I was the only one who knew how to run the facility.
The City of St. Cloud engineers and Jerry Mahon, Assistant Director of the City’s Department of Utilities, were coming to inspect the facility and certify that it was in compliance with their mandate[1].

About 8AM, Max Landy arrived at work, parked his Cadillac next to the plant and came inside to ask if it everything was operating properly. He questioned me, looked about, scowled his approval and stalked out of the building. I walked out to his car behind him and in an assertive voice reminded him, “Now that the plant’s in operation, you’ll approve my raise?!” Max opened his car door, stopped for a second to looked back at me, his face becoming red with anger. Then climbing in the car, he shouted a profanity, and something to the effect, “Dammit, you haven’t been on the job one day and already you want a raise (more unintelligible angry mumbling)” and he sped off toward his office parking spot.

I didn’t have to worry about my job. Max loved me, I mean, he probably wished I would fall over dead, but that’s what the Landy’s liked, a gutsy, ‘don’t take any shit’ attitude. As soon as I had them over a barrel, I used the leverage, it was only fair, tit for tat, it was how one did business with Landy Packing. About two weeks later, a substantial $1.00 raise (about 20% increase) showed up on my pay check and that was just the beginning.

Icabod P. Tailfeathers
During the spring we decided to buy a parakeet. We spent much of a Saturday going about stores where parakeets were sold talking to the sales clerks, inspecting their birds, pricing the cages, feed and toys. We bought a booklet on keeping a parakeet, and the cage setup including: a tall cylindrical brass colored 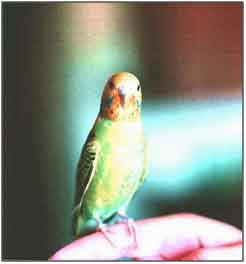 cage, feeder and watering containers, perches, a colorful mirror with a bell on the bottom and parakeet feed. That afternoon and evening we put the cage and its stand up, read the booklet and discussed our soon to be new pet.
[Icabod P. Tailfeathers, the first of three parakeets we had.]
The next day, Sunday, we returned to Woolworth’s where we bought a standard green male parakeet. After he’d been at home with us for a week or two and become accustomed to his new surroundings, we began teaching him to climb on our fingers. It took at least a month of continual practice, before he climbed on a finger whenever it was offered. During the second week in his new home we settled upon a good name for the little fellow, Icabod P. Tailfeathers. It was a big name for such a little bird, so we contracted it and just called him, Icabod. However, when his entire name was reiterated, it was spoken with dignity in a high toned, British
accent.

Before long, his cage was left open, so after we’d come to the kitchen in the morning, or home from work at night, he’d fly over and sit on one of our shoulders. Frequently, Icabod’s visits during our meals were rewarded with little pieces of food. Often he’d sit on one of our shoulders, or the back of the couch,
while we watched television. He liked running at full gallop across the backrest on the couch, where he could pull a strand on one person’s hair then run across the couch and pull or nip the other person’s ear. Icabod was one of the family, a playful little cuss who spent a lot of time busy sitting on his human friends or scampering around on the table while we wrote letters. 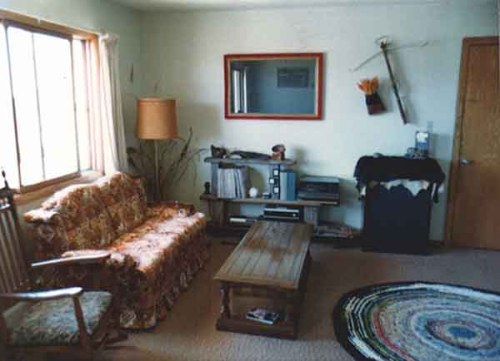 [Photograph: Our living room in the Woodland Hills apartment. The mirror frame, antique rocking chair (a wedding present from cousin Bob) were refinished.  I’d recently made the round, rag rug. We have recently purchased a new coffee table and sofa.]

Garbage disposal at the Woodland Hills apartment
At this time we were living in a high population density, apartment complex, where a cluster of four-plex apartments shared several dumpsters. These steel dumpsters were heavy duty pieces of equipment measuring about four foot high by four foot wide by six foot long, the top was divided in half and each half covered by a hinged sheet metal lid. The idea was to open the lid, drop in your garbage bag and close the lid, so as to control the flies and smell. The problem was that garbage pickup wasn’t often enough. After a couple of days the dumpster was full, its lids were open and trash was bulging out through and above the top. The dumpsters were picked up by a special dump truck with fork lift hydraulics. Steel forks were slid into enclosed channels beneath the dumpster. When the hydraulics were engaged, the dumpster was lifted in an arch over the open back of the truck.
Garbage fell from the dumpster in a rather loud and resounding, “clackity, jangle, bang, whump, whump, thud” all against the background whine of the trucks hydraulic system.

• In synopsis, 1976 was a year of work. We both worked 8 hour shifts, 5 days a week and saved what we could of our combined income. I went to night school one night a week and did my homework another night. During the summer months we maintained a small garden at the VA Hospital. The year didn’t contain any great or glorious events, it was just a time of common life, it wasn’t bad, nor particularly memorable, it just was…

[1]  The City of St Cloud, in conjunction with the Minnesota Pollution Control agency forced Landy Packing to install the pre treatment facility to remove a large amount of the BOD (Biological Oxygen Demand) being generated by the slaughter operation. Until the WWT plant opened, the pollutant running down Landy’s sewage line was threatening to overwhelm the City of St Cloud’s public
waste water treatment plant.