When an ill wind blows from afar
Chemical and biological weapons are some of the most dangerous chemicals and diseases known to man. In modern times, these weapons are at the forefront of terrorist and military threats to our  safety. Chemical and Biological Warfare (CBW), is considered a “poor man’s nuke,” for the cheapness and ease of manufacture, and the indiscriminate carnage and terror they can cause.

Q: What are Chemical Weapons and Their Effects?
http://www.ki4u.com/chemical_biological_attack_detection_response.htm#2
Answer 1:  Basically, you can think of chemical weapons as “insecticides for people.” Think about it, if you put a bug in a jar and spray the outside of the jar with an insecticide, the bug will remain protected and well, as long as his body and breathing is kept separate from the outside poisonous environment. Your protection can come from temporarily sealing your home doors, windows and vents and wearing protective gear if you go outside.
Answer 2:  Chemical weapons are organic and inorganic chemical substances that are harmful to humans. There are several different types of chemical agents. All work in a different manner, but are the same in one facet, in high enough concentration, they will all kill humans. [Again, think ‘insecticides for people’].

•  Nerve Agents: These are agents such VX, Sarin, Soman, and Tabun. These agents are organophosphates, a type of chemical usually used as insecticide. These agents cause the victim to
go through failure of the Central Nervous System. The agent interferes with enzymes in the brain, like all organophosphates. The agent causes convulsions, drooling, involuntary defecation and/or urination, running nose, etc. The convulsions can be so severe that they break bones. Eventually, the agent causes the heart to stop, and the victim dies.
•  Blister Agents: These are  agents such as Sulfur-Mustards, Phosgene Oxime, Nitrogen-Mustards, Lewisite, Mustard-Lewisite, etc. Blister agents are all common in the fact that they burn and blister the lungs, skin, and eyes. When these agents come into contact with tissue, they create terrible burns and blisters, which are extremely painful. A victim can killed when blisters are created in the lungs. When the blisters burst, they fill the lungs with fluid, and the victim ‘drowns’ in the fluid.
•  Blood agents: These are agents like Cyanogen Chloride and Hydrogen Cyanide. They act to poison the blood, and act quickly, like nerve agents, within about five minutes. Coma and convulsions usually precede death of the victim.
•  Choking Agents: These are agents such as Ammonia, Chlorine, and Phosgene. These agents cause damage to the lungs, where the lungs fill with fluid and the victim drowns, much like Blister agents.

All of these agents are extremely dangerous, and all are a very painful way to die. It should be mentioned, that many other deadly chemicals reside in our nation’s chemical industries, and sabotage of these plants is a distinct possibility.

All of these weapons can effectively be defended against with protective equipment.

Def: miosis = an abnormal condition characterized by excessive constriction of the sphincter muscle of the iris, resulting in pinpoint pupils.
.
Table 2:  Symptoms associated with chemical agents

Question: How will you know if a Biological or Chemical attack has occurred?
Answer: Biological and chemical attacks exhibit many distinct characteristics.
•  Dead animals/birds/fish:  Numerous animals dead in the same area.
•  Blisters/rashes: Many individuals experiencing unexplained rashes, bee-sting like blisters, and/or watery blisters.
•  Mass casualties: Many persons exhibiting unexplained serious health problems ranging from disorientation and nausea to breathing difficulty, convulsions, and death.
•  Unusual metal debris: Unexplained munitions like material, especially if liquid is contained. (No rain recently.)
•  Unexplained odors: Smells may range from fruity to flowery to pungent/sharp, to horseradish/garlic-like to peach kernels/bitter almonds to new-mown hay. It should be noted, that the smell should be completely out of sync with its surroundings. (I.E. The smell of hay in an urban area.)
•  Low-lying clouds: Low-lying fog/cloud-like condition not explained by surroundings.
•  Definite pattern of casualties: Casualties distributed in a pattern that may be associated with possible agent dissemination methods.
•  Illness associated with a confined geographic area: Lower rates of illness for people working outdoors versus indoors or indoors versus outdoors.
•  Lack of insect life: Normal insect activity is missing. Check ground/shore line/water surface for dead insects. Also look for dead animals/birds/fish.
•  Unusual liquid droplets: Many surfaces exhibit oily droplets or film. (No rain recently.)
•  Unusual spraying: Unexplained spraying of an aerosol or liquid by vehicles, persons, or aircraft.

The government may be able to provide early warning of an attack via the Emergency Alert System (EAS). Having a NOAA weather radio with alarm in your house or on your person may be yet another option to help detect a chemical or biological attack, as well as alerting you to many other emergencies. Still, remember that the government may not know of an attack and broadcast an alert before your chemical detector itself alerts. So, do not rely entirely on EAS, but rely upon your observations and your chemical detector.

Bottom Line:  Chemical and biological attacks can be detected early, by watching for signs of dispersal, dead insects/animals, sick and injured people, etc. The government’s Emergency Alert System (EAS) may also be of value in alerting you to an attack. Chemical attacks can also be detected with inexpensive chemical detection gear. 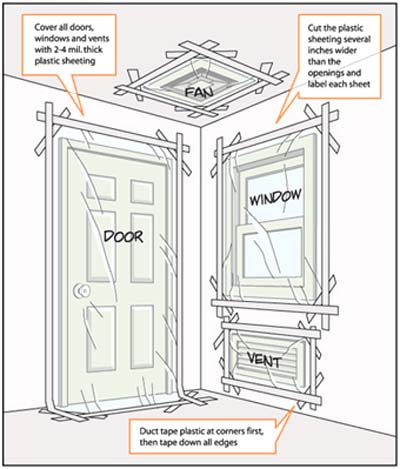 Dr. Henderson recommends preparing your home to be a safer shelter by comprehensively sealing the air leaks in your home’s outer shell and installing a mechanical air supply system that can effectively filter the air coming into your home. He said this is a much better method than using duct tape and plastic sheets to seal yourself in one room after dangerous substances fill the air around your home.

Here is a partial list of the advantages of preparing your entire home so that you can quickly Shelter in Place:
•  Instead of sealing yourself in one room, you will have all of the rooms and air in your home available for your use, while waiting for the pollutants to blow past your home.
•  Microbes (anthrax, botulism, smallpox,…) will be kept outside where the wind can reduce their concentration and the sunshine can kill them.
•  You will have access to all the air in your home, rather than the air available in one room sealed with plastic and duct-tape.
•  Radioactive particles can be removed from incoming air by use of a high-efficiency air filter.
•  Non-filterable gasses can be kept outside by simply turning-off the mechanical air supply system until after the gasses blow past your home.
•  Even if you never have to Shelter in Place,  you can benefit in many ways throughout your life:
__  Sealing air leaks can eliminate uncomfortable drafts.
__  Sealing air leaks and providing filtered fresh air at a controlled rate can  reduce your costs for heating, air
__  Filtration of incoming fresh air can remove allergenic, irritating and toxic particles.
__  conditioning, and humidity control.
__  Controlling the ventilation rate will help you to keep indoor humidity below 50% to discourage growth of molds and dust mites.

General guidelines
Chemical warfare terrorism is much more likely in terms of past successes with chemical agents. Mustard gas canisters can be opened and their vapors simply allowed to disperse—no explosions, no bursts of munitions, just quiet vapors. Their damage would not be known for a couple of days. An unsuspecting and crowded public could suffer catastrophic pain, injury, blindness, and loss of life two days after the fact of exposure. This, to me, is one of the most realistic and horrifying of scenarios. Yet it is one that an educated public can prevent. Do not stand in any area where vapors are escaping. Teach your children not to stand in plumes of smoke or run through any vaporous substance. Iraq used mustard gas in smoke bombs, thus enticing Iranian soldiers to run into the smoke to pursue supposedly retreating enemy soldiers. It was a highly successful ruse.

[You’ll know from increased activity elsewhere– when global or national social-military conditions have reached a point, that calls for the following general procedures. Mr Larry].
People in crowded or enclosed places are in the greatest danger of a terrorist chemical agent attack.
Granted, a city might just get bombed by chemical warheads, but that scenario is not nearly as likely as a crowded building being sealed off from the outside and a chemical agent introduced into the ventilation system or simply opened up in the corners.

We know from the Tokyo subway attack that subways, terminals, even trains and planes are in the most danger of attacks like these. As are crowded buildings—especially theaters, which have no windows and are dark.

People do buy gas masks, but chem-bio weapons can strike when a gas mask and bio-suit are out of range. And for the terrorist, that’s the ideal situation. So the answer is to be smarter than terrorists. Avoid crowded and dark, enclosed building interiors that rely heavily on a ventilation system rather than open windows and fresh air. Visit enclosed buildings only when it’s necessary, in their off-peak hours. (Remember, as we learned on September 11, our enemies like to make grand displays in very public places.) For example,  go to the mall as soon as it opens or at around three in the afternoon on weekdays: NOT on Saturdays at noon. Don’t go to movies. If you are in a crowded, enclosed building, always know where the exits are and your path to reach them. Don’t linger; just complete your tasks and leave. Simply being very aware of your immediate environment has always been the first good defense against crime, and terrorists are just another version of criminals.

It doesn’t cost much to buy and store a roll each of plastic sheeting and duct tape. These items can be drawn on (then replaced) for daily household use, and in a pinch to collect rain water, to cover exposed items after a storm, as an impromptu shelter and in other emergency situations.