Symptoms
Pasted from <http://www.mayoclinic.com/health/west-nile-virus/DS00438/DSECTION=treatments-and-drugs>
1. Most have no symptoms:
About 80% of people infected with the West Nile virus have no signs or symptoms.

Signs and symptoms of West Nile fever usually last a few days, but sign and symptoms of encephalitis or meningitis can linger for weeks, and certain neurological effects, such as muscle weakness, may be permanent.

When to see a doctor
Mild symptoms of West Nile fever usually resolve on their own. If you experience signs or symptoms of serious infection, such as severe headaches, a stiff neck or an altered mental state, seek medical attention right away. A serious West Nile virus infection generally requires hospitalization. 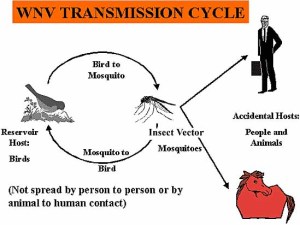 Typically, West Nile virus spreads to humans and animals via infected mosquitoes. Mosquitoes become infected when they feed on infected birds. You can’t get infected by touching or kissing a person with the virus.

Most West Nile virus infections occur during warm weather, when mosquito populations are active. The incubation period — the period between when you’re bitten by an infected mosquito and the appearance of signs and symptoms of the illness — ranges from three to 14 days.

West Nile virus is present in areas such as Africa, parts of Asia and the Middle East. It first appeared in the United States in the summer of 1999 and since then has been found in all 48 contiguous states.

2. Other possible routes of transmission
In a few cases, West Nile virus may have been spread through other routes, including organ transplantation and blood transfusion. However, blood donors are screened for the virus, substantially reducing the risk of infection from blood transfusions.

There have also been reports of possible transmission of the virus from mother to child during pregnancy or breast-feeding, but these have been rare and not conclusively confirmed.

Risk factors
Your overall risk of getting West Nile virus depends on these factors:

Risk of serious infection
Even if you are infected, your risk of developing a serious West Nile virus-related illness is extremely small — less than 1 percent of people who are bitten become severely ill. And most people who do become sick recover fully. You’re more likely to develop a severe or fatal infection based on:

Tests and diagnosis [for that less than 1%]
Your doctor can confirm the presence of West Nile virus in your body by analyzing a sample of your blood or the fluid surrounding your spinal cord (cerebrospinal fluid). If your doctor suspects a serious, West Nile virus-related illness such as meningitis or encephalitis, you may undergo a lumbar puncture or brain-imaging tests.

Treatments and drugs
Most people recover from West Nile virus without treatment. Over-the-counter pain relievers can help ease mild headaches and muscle aches.
There’s no direct cure for encephalitis or meningitis, but you may need supportive therapy in a hospital with intravenous fluids and medicines to prevent other types of infections.

To reduce your own exposure to mosquitoes:

One response to “West Nile Virus”