A.  America Has Fallen Victim To The Normalcy Bias, Do You Suffer From Normalcy Bias?
25 Jan 2013, BeforeItsNews.com
Excerpt pasted from: http://beforeitsnews.com/education/2013/01/america-has-fallen-victim-to-the-normalcy-bias-do-you-suffer-from-normalcy-bias-video-2442598.html 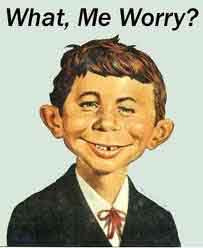 The Normalcy Bias condition is well known to psychologists and sociologists. It refers to a mental state of denial in which individuals enter into when facing a disaster or pending danger. Normalcy Bias leads people to underestimate and minimize both the possibility of a catastrophe actually happening, as well as its possible consequences to their health and safety.

The Normalcy Bias often results in situations where people fail to prepare for a likely and impending disaster. The Normalcy Bias leads people believe that since something has never happened before, that it never will happen. Therefore, like an infant with a security blanket we cling to our habitual, repetitive, and normal way of life, despite overwhelming proof that serious danger lies ahead.

The Normalcy Bias is part of human nature and, to some extent, we are all guilty of participating in it. Unfortunately, the Normalcy Bias inhibits our ability to cope with a disaster once it is underway. People with Normalcy Bias have difficulty reacting to something they have not experienced before. The Normalcy Bias also leads people to interpret warnings and to inaccurately reframe information in order to project an optimistic outcome which leads to the person to infer a less serious situation. In short, it is kind of a pain-killing drug which numbs a person to an impending danger.
.

B.  50 Signs That Human Civilization Is In BIG Trouble: “Times Have Become Strange, Disturbing and Frightening”
4 Aug 2014, SHTFplan.com, by Be Informed
Pasted from: http://www.shtfplan.com/headline-news/50-signs-that-human-civilization-is-in-big-trouble-times-have-become-strange-disturbing-and-frightening_08042014

Editor’s Note: The signs of collapse are all around us. From naturally occurring phenomenon to man-made influence, one can’t help but notice that something just isn’t right with the world. Most people ignore the possibilities, often making up excuses for why they shouldn’t be preparing for a significant change to our way of life. But the evidence, as outlined in the following analysis by long-time SHTFplan Community contributor Be Informed, suggests that failing to prepare for it could have a horrific outcome.

It is not just you that has seen that life has begun to stink for the human population around the globe.  Like a sick person there are symptoms of a much more aggressive underlying condition that can become or IS terminal.  Life is not just like it was a generation or two ago.  This is not just some sort of nostalgic longing for people’s youth.

Times have become strange, disturbing and frightening for most.  Even the most elderly and long lived of the people can tell you that during their lifetimes there has not been such a disconnect with the dreams of people and their futures looking bright.

A negative cloud hangs over human civilization and the following 50 examples show why we all should be quite unsettled.

Number 50 is the most essential.  It is a simple choice by an individual if they want to have a chance to live for themselves and their families and see through a SHTF disaster, or die a hard ugly death.

There are countless more than 50 abominations that humans are rotting through now.  It is the choice of the individual to either attempt to do something about the storm that will come, or live in self denial that this could ever happen.

Do you live in a world where your government will come to the rescue like the cavalry? A world where you need not self prepare for anything because 9-1-1 calls will link help within minutes?
Or have you come to terms with the fact that, as we saw during Hurricane Katrina, you will be totally on your own and failure to prepare will leave you without food, water, or anything else necessary to survive?
A lot of problems with human civilization add up in the future to a collapse of most of everything we depend on.
The choice is up to each individual, as the signs of impending big problems in the future cannot be dismissed no matter how far in ground someone wants to bury the truth.

The following article has been generously contributed by Selco of the SHTF School web site. For those who have never seen Selco’s work, he’s the real deal. He was there in the 1990′s when his city in the Balkans was surrounded by a hostile army. From one day to the next life as he and those around him knew it had changed drastically. The media, of course, told people that everything would be fine. But As Selco highlighted in a previous article, the reality of collapse was brutal. Peace and stability very quickly turned to war and madness. He details his experience in his One Year in Hell survival course. In the article below, Selco shares his views on what it means to survive when your entire way of life has been cut off from the rest of the world.

Do you want to know what it’s really like when it hits the fan? Then keep reading.

Survival Among Humans By Selco
TV news and internet are covered with headlines like “shocking, captured Iraqis beheaded” or “they are killing everyone on their way” and “prisoners executed” and similar.
And folks who watch and comment on the news and videos who still live in a “normal” world without this kind of craziness going on, are shocked of course.

First comments are that those people and groups who are doing that are animals and they need to be “bombed to stone age”, or “they are not deserving better anyway” and then goes “they are all same there, let them kill each other” and similar.

While I would definitely like to see that fanatics getting “eradicated” there, there are more things that should be considered.
Most of the folks are not going to watch video of that violence, because it is too much for them they will change channel, or simply open the page with news from the “celebrity world.”
People do not want to watch or think about bad things, people want to forget that, and yes, at the end there comes again that famous “it cannot happen to us” idea.

I hope you do not because I highly doubt anything like this is going to happen anywhere.
Forget good guys and bad guys. Prepared guys win, they can be good or bad, or both.
Problem is in the fact that simply too many people are waiting for S. to hit the fan so they can go out and play their own version of God. Just ask yourself this question: Who is more experienced living in place without any law, criminals or regular folks?

Criminals, sick folks, small Napoleons, guys who suddenly think that they have solution for building new society without including morale in story…
There are guys who wait for SHTF to go out and rule, to take your food, enslave you, recruit your older kids, or to take your wife maybe for fun.

Maybe how and when everything happens in your neighborhood would be different when SHTF then in those news articles that we talking about, but lot of things gonna be the same, lot of people, not enough resources, and fight for power.

It is often hard to imagine for regular people how nasty other humans can become. If you have been to prison, war or deal a lot with criminals you know better.
And again, I am taking this from my own experience. Again.

One day I had job, family, car, restaurants, cinema, girlfriends, I was listening Guns n Roses and was angry about last album of Metallica. Life was nice and good to me, I had problems but they were in the range of am I lazy to go and rent video tape, or just spent afternoon reading something.
Then BAM!
I suddenly realized that I am living among guys who are finding amusement in taking women and teenage girls to “rape prisons”, or kill for fun and not for survival. I suddenly realized that I was living all the time among whole bunch of weird sick folks who when SHTF just went out to have fun.

But forget that, forget about image of “we are nice and decent folks here, and it is impossible to happen to us, these kind of atrocities.”

Whenever someone I know tells me about bad situation here something like “OH, it is gonna be OK, it is not gonna happen to us, situation will be better,” in that same moment I get a strong urge to go out and buy more ammo.
Or whenever someone says to me “do not worry, we have system here, they gonna take care of everything,” I feel like I am gonna throw up.

Screw the system, you need to build your own system.
It is like people live in their own little pretty house. Outside you have monsters knocking on windows looking at the people inside but they look away. Facing reality is uncomfortable and most believe monsters never come in. Bad news is that closing your eyes does not make you invincible. You are just blind and more vulnerable.

Lesson here is, do not discount what you can learn from ongoing crisis half way around the world. I never expected people could turn into monsters all around me so fast, I adapted and survived, but you have chance today to understand this and be prepared for this.