A. How to Survive Societal Collapse in Suburbia
Excerpt pasted from: http://www.nytimes.com/2012/11/18/magazine/how-to-survive-societal-collapse-in-suburbia.html?pagewanted=all&_r=2&amp; 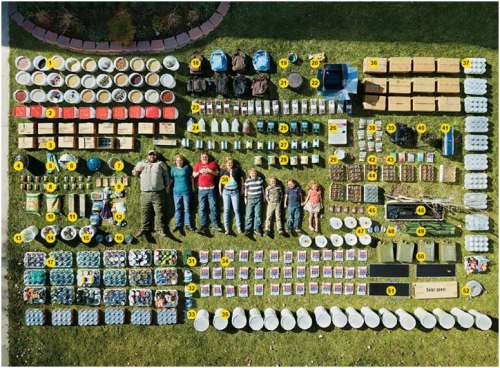 Photograph by Dwight Eschliman for The New York Times 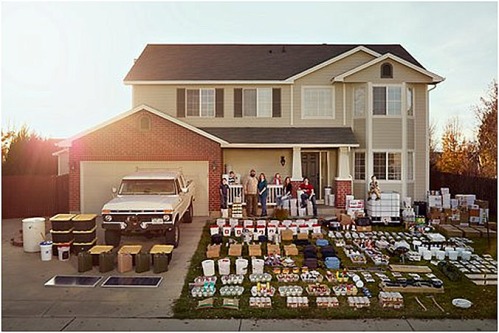 B. Survival In A Big City After Disaster
12 November 2014, Modern Survival Blog, by Ken Jorgustin
Pasted from: http://modernsurvivalblog.com/systemic-risk/survival-in-a-big-city-after-disaster/

The issue of survival in a big city following a major disaster is a serious one. In 1800, only 3 % of the world’s population lived in cities. Today, about half of the world’s population lives in urban areas, and in developed countries up to 70 % or more live in larger cities. New York and Los Angeles are among the top 10 most populous cities in the world. There are 30 MSAs (Metropolitan Statistical Areas) within the United States which have 2 million people or more.

What could possibly go wrong?

Hopefully nothing… however don’t count on it. A microcosm of what could go wrong already happened years ago in New Orleans. Remember Katrina? What about Hurricane Sandy not that long ago in the heavily populated Mid Atlantic region of the Northeast? Does anyone remember the LA riots? What about Ferguson MO?

There are all sorts of natural or man-made events which could spell disaster for the big cities.

What about this one… There are approximately 50 percent of Americans who get some sort of government benefits and there are 82 million households on Medicaid. The amount of people on SNAP (food stamps) has nearly doubled since 2006. And this is only from 2011 Census data. There’s little doubt the numbers are even worse today. How many of these people live in the cities or metropolitan areas? I would suggest that the majority do.

What happens if government assistance is reduced via a financial collapse, or perhaps by a devalued dollar through price inflation – which buys less product? What happens if EBT cards stop working or are ‘worth’ much less than before? I will tell you what happens… The dependent class will revolt.

Without going further down that rabbit hole (I digress), let’s think about survival in the big cities. Let’s face it. There are lots of you who live in the cities or heavily populated MSAs.

When considering one’s preparedness and/or how to survive in the city after a disaster – the thought processes, the plans, and the resulting actions will depend (very much) on the circumstances that one is preparing for. In other words, how bad of a disaster scenario and how long might it go on. These are judgment calls which are made during the event and are preconceived “what if” scenarios based on your own risk tolerance.

The first thing that many people will think to do (following a disaster while living in the city) is to simply ‘bug out’, get-out-of-dodge, leave the city to greener pastures. The problem is, many people really do not have another realistic place to go than where they are now. Unless you truly have a willing friend who lives away from the city, then you will need to think about Plan B. Besides, who’s to say that you could even get out of the city during certain disasters? For an obvious short-term localized disaster you could certainly try to get out and stay in a hotel somewhere out of the region. Traffic will certainly be snarled.

Plan B is to face the very real possibility that you will be stuck right there where you are now. In the city. This is a very bad situation for some disaster circumstances, however for other scenarios it is survivable. Much depends on initial severity as well as the expected length of time in which you will be adversely affected.

If any of the city infrastructure is severely damaged, you will probably be facing a relatively long time to recovery and some very serious problems. If the water and/or sewage is affected, then you are in big trouble. This could be the result of physical damage (e.g. a major earthquake, attack, etc..) or it could be the result of regional (or wider) power outage. If it’s the later, then you will need to understand the cause of the power outage so that you can reasonably determine the expected length of time until it’s re-established (very important to discover and know). A battery powered portable radio is an essential item to get news and information about the disaster.

A major electrical grid power outage could be caused by storm damage. Ice storms are particularly notorious for this, as well ask hurricanes which wreak wide spread damage. Often these types of weather related outages will be resolved within days or weeks because the power company brings in multitudes of crews from other regions to help with the repairs.

On the other hand if the power outage has been caused by a worse enemy, such as a ‘Carrington Event’ solar flare & CME, or by an EMP (electromagnetic pulse) attack, then this could be a life-ending event for many millions. How will you know? Some or all things ‘electronic’ may not be operational (fried). An entirely different approach must be taken to survive this. But that’s another subject.

For starters, while considering how to prepare for disaster while living in the city, figure out how you will survive based on the four previously mentioned factors. Since most (typical?) disasters are relatively short lived (hours, days, maybe a week or two), then the foremost important thing to do is determine what you will need (in your city apartment or home) to survive without these things. In other words, you’re on your own (completely) for a day or two, maybe a week, or maybe even two.

We’re talking about some of the basics such as water, food, sanitation, keeping warm (during the winter) or keeping cool (summer), and your personal security. Although depending on exactly where you live, your personal security should not (generally) be an issue at first, given a short term disaster. Just keep in mind that when it begins to go on past day-3, then there will be increasingly desperate unprepared people – at which time security will become an increasing issue.

Water
Water can easily be procured and stored. Figure at least 1 gallon of water per day per person. More is (always) better in this regard. You can stock up on cases of water bottles and/or fill up some water storage containers. Get yourself a quality drinking water filter. Most people forget the water when thinking about preparedness. If you’re reading this, there’s no excuse now…

Food
Store some foods which do not require cooking (important). Remember, you can safely eat grocery store canned foods without cooking (even though you’re used to heating them up first). Don’t forget the manual can opener. There is literally no excuse for anyone not to have enough food storage to survive several weeks.

Sanitation
Imagine the scenario without running water. Consider keeping a quantity of ‘wet wipes’ or some such disposable cleaning wipes for hands or other duties. Know that you can flush a toilet without running water. If the power is out for long, this could become a big problem in the city if their generators are not working (or run out of fuel). Pumps are required to water to your faucets and to move sewage – which might ‘back up’ into buildings. Don’t laugh but a 5 gallon bucket (or your existing empty toilet) lined with a heavy duty trash bag (use kitty litter to pour over afterwards) is better than nothing. You could then tie and dispose of used bags somewhere outdoors (although it will be another difficult issue in the city).

Heating & Air Conditioning (Shelter)
A big issue for survival in the city following a disaster is the potential lack of HVAC (heating and air conditioning). Air (or lack thereof). Most apartment buildings (and large buildings in general) are designed to produce a climate controlled environment (which requires electricity). Many buildings do not even have windows which can be opened. Even if they do, it won’t be enough during the summer to prevent a virtual ‘cooker’ in such a building. And if during the winter, you will need to find a way to stay warm without the HVAC system (safely). Mostly, this means wearing warm winter clothes, jackets, hats, gloves, thermals, and having a cold weather sleeping bag. You can survive this way without heat – so long as you have adequate clothes and protection (shelter).

Personal Security
Your personal security will potentially be at risk in the city if the disaster looms long. Face it – most people are not prepared whatsoever for disaster. These people will be ‘screwed’ in a moderate or long term event. Coupled with the dangers of desperate people doing desperate things will be the city gangs of thugs who will take advantage of the chaos. Avoid confrontation by being prepared ahead of time and staying home while you secure your own perimeter and go about the task of survival. For anywhere it is legal, I suggest owning a firearm. Learn how to use it at the range (most people who’ve never shot a firearm before are surprised at how much fun it is when they finally do ). The longer the disaster scenario plays out in the city, the more dangerous it will become for you. Know this and prepare for it accordingly.

Apart from water, food, shelter, security, there are countless other considerations and supplies which will help during a time of disaster. Browse this site (http://modernsurvivalblog.com) and others for lists and ideas. Some of the ideas are obvious ‘no-brainers’ such as a flashlight and extra batteries, while other ideas may really help you in other less obvious ways…

In conclusion, let me say this… during a complete collapse of society and/or SHTF, the cities will not survive. Today’s ‘Just In Time’ distribution will collapse and leave the cities as wastelands of descending chaos. When the trucks stop, it’s over. IF you sense that the disaster is leading towards complete collapse, then I would do everything in my power to get out of there.