Family Line A: The Pilgrims

HISTORICAL NOTE: The Howland family began with Bishop Howland, who performed the obsequies for Mary, Queen of Scots. Queen Elizabeth granted the Howland family their Coat of Armor in 1584.{D7}
Huntingdonshire (or Fenstanton), in southern England was John’s hometown.{D8} {D12}
John Howland, who was born about 1592, came to the New World as a servant of John Carver. Since there is no record of Howland’s residence in Leyden, he is credited to London for the reason that Carver was in England for some considerable time before the sailing of the Mayflower and undoubtedly obtained the services of Howland in that city prior to departure.{D1}
John Carver came with his wife, Catherine Desire Minter, two men servants (John Howland and Roger Wilder), a maid servant and a boy (William Latham). Carver is believed to have been the son of Robert Carver and to have been baptized 9 Sep 1565, at Doncaster, Yorkshire, Eng., which is approx. 7 miles from Austerfield and next to Bently. Humility and benevolence were eminent traits in his character.{D3}

TRAVEL: While enroute to the New World the Mayflower was caught in several severe storms. During one storm, Bradford records: “…In sundrie of these stormes the winds were so feirce, and seas so high,

as they could not beare a knote of saile, but were forced to hull, for diverce days togither. And in one of them, as they thus lay at hull, in a mighty storme, a lustie yonge man (called John Howland) coming upon some occasion above the grattings, was, with a seele of the shipe throwne into (the) sea; but it pleased God that he caught hould of the top-saile halliards, which hunge over board, and rane out at length; yet he held his hould (though he was sundrie fadomes under water) till he was hald up by the same rope to the brime of the water, and then with a boat hooke and other means got into the shipe againe, and his life saved; and thought he was something ill with it, yet he lived many years after, and became a profitable member both in church and commone wealthe…”.{D9, page 94}

EVENT: On 6 Dec 1620 a Third Expedition was sent ashore to find a place for the colonists to settle. Ten of the groups “principall men” were in the party, including John Tilley, Richard Warren and John Howland. They landed at Plymouth on the 11th. About midnight they heard savages make “a hideous and great crie”. Shortly after 5:00 AM while preparing breakfast there was an Indian attack “and whithall their arrows came flying amongst them”. The landing party ran to recover their arms. After a brief exchange of gunfire and arrows the Indians withdrew. This was called “The First Encounter” (a battle with the native Indians) at Great Meadow Creek.{D7}

EVENT: There was a tract of land in ME, patented by the Plymouth Colony for exclusive trade. This tract extended up the Kennebec River from Cobisecontt (present day Gardner, ME) to the falls or rapids of Nequamkick (near present day Winslow, ME). In April 1634, according to his deposition: John Howland was in charge of the Plymouth colony trading post on the east bank of the Kennebec River at Cushenoc, near what is now Augusta, ME. Another trader, named John Hocking, began illegally trading up stream by the rapids, so as to intercept the Indians as they came down river. Howland took 3 men up to Hocking and ordered him to leave. Hocking refused. Soon afterwards, Howland returned with his men to remove Hocking by cutting his mooring ropes. When the Plymouth traders paddled near Hocking’s boat, Hocking came out armed with a pistol and rifle. When he pointed a gun point blank at Talbott’s head, Howland asked him not to injure the man for he was only following his orders. Hocking paid no attention but shot Talbott dead. One of Talbott’s friend in the canoe returned fire killing Hocking.{D6} One hundred twenty years later, in 1754, as a safeguard against French and Indian raids, Fort Western was built on the site of the Plymouth Colonies old trading post. The Fort was restored in 1921 and subsequently presented to the city of Augusta, ME, where upon it has become a museum.

LIVELIHOOD:
1. In 1641 John Howland was Deputy to the General Court.{D7}
2. 5 Mar 1657 John Howland traded Christopher Winter “one half of the great Land” in the Township of Marshfield, including both upland and meadow with all the housing upon the land, for a farm called “the Govrs farm”, in the Township of Barnstable. The latter contained 90 acres of upland and 12 acres of meadow.{D5}
3. 1 Apr 1661 John Howland (of Plymouth), Abraham Peirse (of Duxburrow) and five others (all from the jurisdiction of Plymouth), bought a tract of land from Quachatasett Kesepett and Webcawett Doe, Indian Sagamores, for £50.00.{D4}

WILL: Written 29 May 1672: “…Item I Will and bequeath unto my Deare and loving wife Elizabeth howland the use and benifitt of my now Dwelling house in Rockey nooke in the Township of Plymouth aforsaid, with the outstanding lands, That is uplands and meddow lands …Item I give unto my Daughter hope Chipman twenty shillings…” Therefollow four pages of personal, household inventory both itemized and valued.{D10}

The Jabez Howland House is the only existing house in Plymouth  where Pilgrims actually lived. The original 17th century two-story timber framed house consisted of the porch, hall and hall chamber. John Howland and his wife, Elizabeth Tilley Howland spent their winters here with their son Jabez and his family.  After John’s death at age 80, and the fire that destroyed their Rocky Nook farm, Elizabeth lived here until 1680 when Jabez sold the house. It was a private residence until 1912  when it was purchased for a museum. 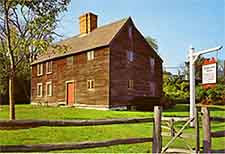 In the 1940’s extensive work was done to bring it back to  its original appearance. Today the museum houses fine period furniture as well as artifacts from archeological digs at the Rocky Nook homes of John and Elizabeth and their son Joseph’s farm. [Photo right: Jabez Howland house.]

of John Tilley, who came with him in the Mayflower Dec 1620. From them are descended a numerous posterity. He was a godly man and an ancient professor in the wayes of Christ. Hee was one of the first comers into this land and was the last man that was left of those that came over in the shipp called Mayflower that lived in Plymouth.”{D2}

HOME: Elizabeth’s family was from Henlow, Bedfordshire, England.{D1} She was baptized at Henlow in 1608.{D5}

EVENT: Her parents, John and Elizabeth, died the first winter in America of the “General Sickness” leaving but one known child, Elizabeth, who married John Howland.{D6}

HISTORICAL NOTE: Elizabeth’s signature (at age 67) is found on a Bond of Administration of her deceased husbands estate, dated 5 Mar 1672.{D3} [Below: Signatures of John and Elizabeth Howland.]

WILL: The Will of Elizabeth Tilly-Howland was signed by her hand on 17 Dec 1686. The estate was left primarily to her children. Her daughter Hope Howland -Chipman died 3 years earlier. (married to elder John Chipman)

Filed under My family in history, __1. 1620 Mayflower lineage