Setting up a Mobile Kitchen

Recently, I was recalling back a few years earlier,  to  when Hurricane Ike came through my home town and knocked out the electric power. I remembered setting up the families Coleman propane camp stove outside on the deck, being aware of the toxic carbon monoxide fumes that would have accumulated from cooking inside.

We adults huddled over the camp stove cooking our meals. The two burner stove sat on a metal planter stand, while our work space consisted of a small wooden box about 18 inches long. We heated water for our traditional morning’s cup of coffee, fried eggs, warmed ‘microwave bacon’ in a skillet and browned ‘toast’;  everything was pretty much eaten cold.

Later in the day, we boiled canned soup, had peanut butter and honey sandwiches, and heated Dinty Moore stews and other canned meals for supper.

Often, especially in the early mornings, while my partner cooked, I ran back and forth between kitchen and deck, a flashlight in one hand, bringing out a jar of dehydrated coffee, then our silverware and plates, peanut butter, salt and pepper, jam, peanut butter, the bread….

Every meal required items be brought out of the house and returned, each one or two items meant a separate trip through the house, into the kitchen, then back out to the deck. It was exasperatingly inefficient for the two of us; there was no organization, nothing was handy. We had the physical supplies, but the flow of materials needed to prepare emergency meals, ‘on the fly’  had never been thought out.

We had everything needed in the house to deal with an emergency meal, but for what turned into almost a week long power outage, the items needed to process the food were never really ‘handily available’.

Think about it. Every item used in the kitchen to process a typical meal is handy: the  knife, fork and spoon in a drawer or on the cutting block, a pot or pan in the lower cupboard, a bowl, plate cup or glass in the higher cupboard, salt and pepper shakers are on the kitchen table, the spice tray/rack  is here, paper towels or dish cloth are near by…Everything is handy, just a step or two in any direction and the item is put in use, then left sitting on the sink counter for further use or washing.

But when you set up an emergency stove outside on the deck, balcony or in the yard–non of your  food preparation and cooking  paraphernalia are available. In order to cook anywhere other than in your dedicated kitchen space, you’ll need to move a lot of small specialty items back and forth to and from the worksite .

After the storm, and as the months passed, the realization that there wasn’t a proper sized

surface to cook and work on, prompted me to make a six foot long bench (See image). The bench would be for guests and ourselves to sit on when  visiting, but it would double as a work surface for our: propane stove,  propane oven,  canned fuel hot plate (for the coffee),  other food preparation items  and as a workspace.

Although I didn’t spend much time thinking about the situation during daily activities, what continued to eluded me, was how to avoid the disorganized ‘running back and forth’ for food prep items.

I recalled that when the electric power was out, it was a slightly confusing and disorienting time, due to a) the disruption to our daily schedules and activities, b) unaccustomed temperatures, and adding to the problem, was c) trying to assemble the needed cooking items in an efficient and handy way to process our meals and eat in, d) an attempt to retain a low stress environment.

One day recently, I watched a woman in a You Tube video discuss having made up a small mobile kitchen for her thermal cooker, her idea provided a catalyst for me.

I re-watched the ‘mobile kitchen’ portion of the video again, stopping the clip every couple seconds to write up and expand on her list.

For the next couple of weeks, I read articles on the Web about what food prep items people typically  take camping, backpacking, and have on hand for emergencies.

The concept expanded beyond utensils one would want handy for a meal cooked in a ‘thermal cooker’, as the video showed, to cover most cooking situations. The updated Mobile Kitchen concept included: cooking with pot and pans, frying, a variety of food types being processed, and had to handle several consecutive meals prepared under emergency conditions.

I studied common spices and made a list from discussions on YouTube;; camping, emergency web discussion groups. A master list was made of the most widely suggested spices to have in an outdoor/emergency situation, outliers were removed and some personal favorites added.

In order to have a small amount of multiple spices handy for short term cooking, I ordered some 1 oz and 2 oz dry storage plastic jars with snap lids, and several empty 3.4 oz TSA approved liquid containers (all very cheap from Amazon.com).

Several cooking adjuncts were added to the spice list, including: vinegar, cooking oil and honey, which went in the 3.4 oz liquid containers.

I found design ideas for spice labels on the Internet, then made my own using existing sheets of Avery envelope label blanks. Tape would have worked as well for labeling. Likewise, is only a few spices were being gathered for the mobile kitchen, one could simply add an entire spice bottle or tin.

Most of the items needed were bought at Wal-Mart.

Finally, I took a general measurement of everything while it was roughly stacked,  to determine the approximate size of containers needed to pack it in. The boxes needed were found at my local Wal-Mart superstore. Everything was subsequently put together and photographed  and is listed below.
The result is a broad capability, Mobile Kitchen.

I recommend using a butane stove for indoor cooking. Using much less toxic butane fuel you can set the stove right on your current (electric) kitchen stove top or cook on the sink counter top, as  you wish. Let the ‘chimney effect’ draw what little fumes there are up the  kitchen exhaust vent, or crack a window briefly when cooking on the sink.

The images below show my Mobile Kitchen contents, butane stove, cookware and spices.
I hope this article helps with your preps.
God Bless America.

The Mobile Kitchen was developed as a means to efficiently bring cooking and food preparation paraphernalia to a central location, for cooking in an emergency situation. It would work for preparing food: Indoors, on a porch, deck, patio, picnic table, curbside or for ‘car camping’. It is not designed as a long term survival kitchen, but could easily be expanded for longer term needs.

Preparation apparatus tub components (At left in the image above)

Cooking & Eating utensils tub components (At right in the image above)

Notes:
> Neither of the two Sterilite totes are full when the kit is assembled, leaving room for situation specific expansion.
> Most of the common items in the Mobile Kitchen were bought in Walmart’s Kitchen and Houseware Depts. A few of the items cost $0.88 each, other’s $1.00 and a couple up to $3.50. 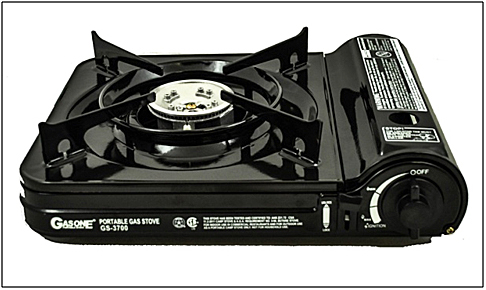 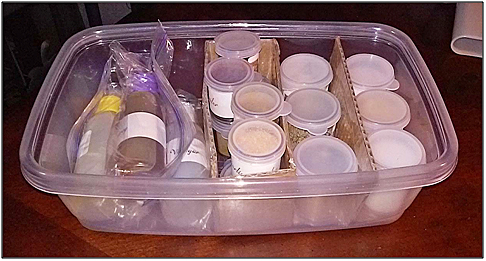 Spice Notes:
> The great thing about spices is that they never actually spoil. But over time, spices will lose their potency and not flavor your food as intended and you may need to experiment on how much more spice needs to be added.
> As a general rule, whole spices will stay fresh for about 3-4 years, ground spices for about 2-3 years and dried herbs for 1-3 years.
> Spices that have been in the pantry for 5 years won’t make you sick, but will just lose their zest.  The best way to store spices is in air tight containers, preferably a dark container and in cool spaces away from moisture such as a stove or sink.  Even in doing this, most of your ground spices only last about 2 years.

Be safe, be well.
Mr.Larry