When this scenario occurs, if you’re living in central California, you will be put in a survival situation. If you were not living in California, the result will be seen developing into a national economic depression.

1.  California Superstorm Would Be Costliest US Disaster
Mar. 8, 2011, ScienceDaily
<http://www.sciencedaily.com/releases/2011/03/110307142236.htm>
“A hurricane-like superstorm expected to hit California once every 200 years would cause devastation to the state’s businesses unheard of even in the Great Recession, a USC economist warns.

Researchers estimate the total property damage and business interruption costs of the massive rainstorm would be nearly $1 trillion USC research professor Adam Rose calculated that the lost production of goods and services alone would be $627 billion of the total over five years. Rose, a professor with the USC School of Policy, Planning, and Development, also is the coordinator for economics at the Center for Risk and Economic Analysis of Terrorism Events (CREATE) at USC.

That number would make the severe storm scenario “the costliest disaster in the history of the United States”, Rose said, “more than six times greater than the 2001 World Trade Center attacks and Hurricane Katrina, which each caused $100 billion in business interruption.” [Photograph above right: K Street, Sacramento, CA in early 1862 following an ARkStorm.}

The storm simulation U.S. Geological Survey (USGS) scientists termed “ARkStorm — or “atmospheric river storm” — is patterned after the U.S. West Coast storms that devastated California in 1861-62. The storms lasted for 45 days, forming lakes in the Mojave Desert and the Los Angeles Basin. California was left bankrupt after the storms wiped out nearly a third of the state’s taxable land, according to the USGS. But those storms were no freak event, said USGS scientists, who called the ARkStorm model “plausible, perhaps inevitable.”

According to the USGS, the ARkStorm would:
•  create hurricane-force winds of up to 125 miles per hour in some areas and flood thousands of square miles of urban and agricultural land to depths of 10 to 20 feet.
•  set off hundreds of landslides that would damage roads, highways and homes.
•  disrupt lifelines such as power, water and sewers that would take weeks or months to repair.

Rose estimated the ARkStorm would cause the state’s unemployment rate to jump six percentage points in the first year, a further blow to the California economy that currently has one of the highest unemployment rates in the nation at 12.4 percent.
Rose called the severe storm scenario “much more imaginable” after Los Angeles was hit with 9.42 inches of rain in December [2010]. It was the wettest December in downtown Los Angeles in more than a century.
Climate scientists said global warming is a major factor behind the increasingly destructive power of hurricanes and other storms. The sea level is rising as oceans warm and glaciers melt, which can create higher storm surges and more disastrous flooding in coastal areas. “Climate change affects how the whole ecosystem works,” said Mark Bernstein, managing director of The USC Energy Institute.
“Storms form based on how warm the oceans are and how the jet stream changes,” Bernstein said. “The consequence is [the rain] will come in shorter and more intense bursts.”
Businesses and local governments can minimize the long-term impacts of such a disaster, Rose said, by creating emergency plans, increasing inventories of critical materials, backing up information systems, and diversifying supply chains and routes.” 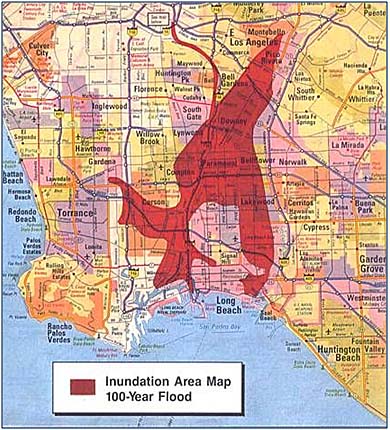 The levees along these two flooding sources do not provide 100-year flood protection, according to FEMA’s guidelines and specifications. Levee failure scenarios were evaluated to arrive at an approach that would be most reasonable for floodplain management purposes within these communities. SAAD evaluated and resolved appeals submitted by eleven of the affected communities, requiring close coordination with Los Angeles District and FEMA.

This flood control study resulted in a significant increase in Special Flood Hazard Area (SFHA) along the Los Angeles River and Rio Hondo for these sixteen communities. The increase in the SFHA was primarily attributable to decertification of levee systems along these watercourses from protecting against the 100-year flood. As a result, approximately eighty square miles of new SFHA were added, affecting approximately 400,000 local residents and 125,000 structures. The proposed control project, given the spillway releases of the upstream dams were maintained, would contain the 100-year flood (@130,000 cfs) within the river channel by constructing parapets on top of both levees (2-4 ft) and raising several bridges along the Los Angeles River.

_B. Whittier Narrows Flood Zone (below)
Pasted from <http://www.flickr.com/photos/tardigrade-page/5049616649/>
Created by the Army Corps of Engineers in August 1986, these maps have been scanned and stitched together in Photoshop to show the entire area in Los Angeles and Orange Counties. The Whittier Narrows Dam was built to be big enough to hold the water from four dams upstream in a disastrous situation. The Dams in the mountains were built in the 1930s the WN Dam in 1957. The WN Dam was not built to hold water like a lake.

.2.  Another ARkStorm is Inevitable
<http://www.shtfplan.com/emergency-preparedness/massive-west-coast-atmospheric-river-storm-inevitable-emergency-response-would-be-lacking_01182011>
Such storms have happened in the California historic record (1861-1862), but 1861-1862 is not a freak event, not the last time the state will experience such a severe storm, and not the worst case. Associated with the Arkstorm will be:
•  Massive, State-wide Evacuations – Because the flood depths in some areas could realistically be on the order of 10-20 feet, without effective evacuation there could be substantial loss of life.
•  Economic Catastrophe – A severe California winter storm could realistically flood thousands of square miles of urban and agricultural land, result in thousands of landslides, disrupt lifelines throughout the state for days or weeks, and cost on the order of $725 billion. This figure is roughly 3 times that estimated for the ShakeOut earthquake, another planning scenario reflecting an earthquake with roughly the same annual occurrence probability as an ArkStorm-like event. The $725 billion figure comprises about $400 billion in property damage and $325 billion in business-interruption losses.
•  Wide-spread Flooding – Perhaps 25 percent of buildings in the state could experience some degree of flooding in a single severe storm.

The population of the Sacramento and San Joaquin valleys exceeds one million people, and because of how and where those valleys are situated, an ARkstorm similar to the one from 1861/62 would be absolutely devastating, likely displacing the majority of that population. This does not include other low lying areas of the state which would be affected. Such an event would affect not only California, but have disastrous effects across the entire nation, economically.

The USGS report also identifies various challenges faced by emergency response personnel:
There is a lack of policy and experience among state and local emergency responders and government managers in dealing with the complexity of mass evacuations, short- and long-term housing needs, and the restoration of communities statewide once the flood waters recede.
Translation: When it hits the fan, you’re on your own. Like any major natural (or man-made) disaster scenario from floods and earthquakes to hurricanes and tornadoes, expect that no one will be there to help, especially for the first 3 – 7 days. Federal, state and local response to Hurricane Katrina should be used as a guide.