In Chapter 9: Data Compilation, we’ll draw together data covering the spectrum of our model alien worlds. Using the templates provided in Chapter 10 Templates, you can create a good conceptual model of any habitable planet covered in this study.

Initial Environments Compilation Table
The Initial Environments Compilation Table, below, provides the specific conditions within the physical or biological environments of our model worlds. Firstly, we’ll examine a small section of the table as seen in the cells at left.
The table’s columns are labeled with the APST (average planetary surface temperature); rows are labeled with  Planetary Mass (relative to Earth which =1.0).

Every combination of APST & Planetary Mass contains a box with a list of numbers; these numbers, become line numbers in a list of specific surface conditions found within the environment of that particular planet.
In order to extract information from the table, choose a planetary mass and an associated APST, then read the numbers in the corresponding data box.  If for example we chose a ‘damp’, 0.5 Earth mass planet with a ‘cold’ 0ºC APST, we’d find the data box containing the numbers, see box at left: 12,16,19, 27, 28, 31, 33, 37, 40. 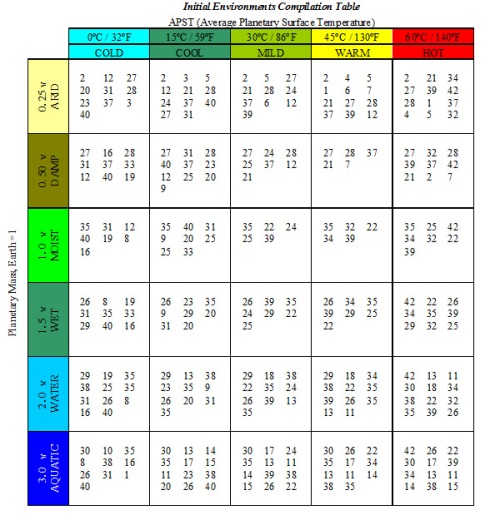 Star-Planet Energy Relationship Table
In the table, Star-Planet Energy Relationships Table, immediately below, each model planet’s mass and the parameters leading to the average surface temperature are compared to provide the resulting associated: % cloud cover, solar constant and albedo; this information will be useful in filling in the templates that follow in Chapter 10. 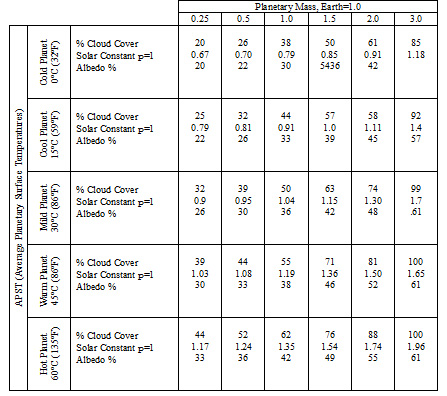 Table of Planet Surface Conditions
The Table of Planet Surface Conditions, large sideways chart below, was derived from combinations of the physical parameters existing on our model planets. On the table, you’ll find planetary mass rows listed along left margin. Reading from left to right along each row, you will intersect with columns of various environmental characteristics and potentials associated with that chosen mass (planet size).

For example, let’s examine a 2.0 Earth mass planet: Reading across the table, the conditions we would expect to encounter on that world would be a:
•  L  (large) potential for wind generating energy,
•  M  (medium) expectancy for wide use of buried organics for fuel, i.e.  petroleum/coal,
•  S  (small) expectancy that solar power will provide much energy.

Further along that same row we find the planet has the addition probable characteristics (among others):
•  G  (great/much) volcanism, as compared to Earth,
•  S  (small) mountain height,
•  and, a 150 pound man on Earth would weigh 204 pounds there.

Continuing to read across the row titled, 2.0 Earth mass,but now looking at the far right side of the table,  we find that with;
•  A 0ºC (-32 º F) APST, the planet would have M (medium) or average (somewhat similar) humidity as found on Earth.
•  At 45ºC (113ºF ) APST, the average humidity would be considered VH (very high)  compared with the Earth average.

The Relative Humidity  sub-table (far lower right) was derived from the considerations that:
a) A graded land-water ratio exists on the study planets and that the water coverage to area dry land ratio increases with the mass of the planet.
b) The greater the mass of the planet, the greater the atmospheric density.
c) As the APST increases, the average  planetary humidity increases. On two planets with the same APST: The smaller planet, with a thin, light atmosphere and relatively small bodies of water, will have lower humidity than a large planet with its heavier, denser atmosphere and large bodies of water.

Comparing the various data in the Table of Planet Surface Conditions, you can see that Man could potentially do quite well on some of the model planets, but would be under considerable biological stress under others; examples can be seen below, from an examination of several variables in the following small table, which was extracted from Environments Table IV.

.
Condition 1:  An Earth like planet, used for comparing Conditions 1 & 2 below.
Condition 2: The planet’s lower gravity results in a human colonist weighing less than on Earth. Man is therefore more mobile, physical activity is less taxing and he requires less oxygen; however,  there is less oxygen available in the thinner atmosphere. The planets habitable equatorial region has temperatures in the 41ºF to 45ºF range. Cool temperatures and low humidity would result in outdoor work conditions similar to those encountered during the Fall season in Earth’s mid latitudes.
Condition 3:  The planet’s higher gravity results in the Human colonists effectively carrying an additional 54 pound body weight. High gravity, high humidity and quite warm temperatures would create an environment more difficult for Man to settle. The planet’s habitable temperature zone basically extends from 50º to 70º latitude and carries a rapidly decreasing temperature across the latitudes, from 99ºF to 41ºF across this band. On the positive side, there is a large amount of atmospheric oxygen which would assist in labor and increase the efficiency of converting organics into electricity, etc. The planet would be more ideally suited to a short (about 4 feet tall) and slender intelligent being. This species expansion would probably require specialized adoptions to rid their body of heat. If the planet orbited a F class star, we might expect to find the alien with darker skin pigmentation, particularly in lower latitudes. Warm blooded animal life on such a planet may not have developed heavy fur coats as are found on Earth mammals. 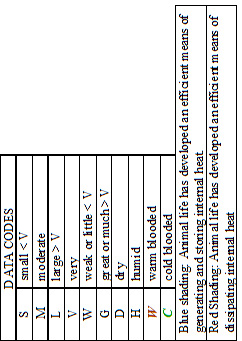 This study can be used:
1.  To understand star-planet-biological relationships
2.  Determine general planetary environments
3.  Assist in the study of Humans and human technological adaptively under a variety of habitable extraterrestrial conditions.
4.  Back track an intelligent alien, that is, given a description of the intelligent alien’s form you will be able to derive a general model of his home planet, thereby narrowing the range of a) detected habitable star-planet configurations we know of, to date, b) or other Main Sequence stars, from which he came. 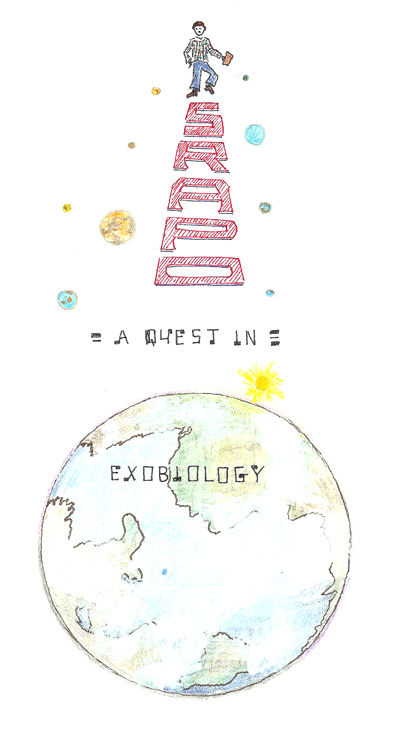 [“SRAPO is the eighth Journal  of Larry Francis Pierce, being written in the year of our Lord 1985, at the forest homestead – Nightstar *”.
I began the SRAPO project during 1965, while in my first years of college. Twenty years later, in 1985, the study was reworked and entered into Journal #8, along with the associated charts, tables and my hand drawn illustrations. By the mid 1990s, SRAPO was converted into digital form; it is now being converted into the WordPress blog format.] 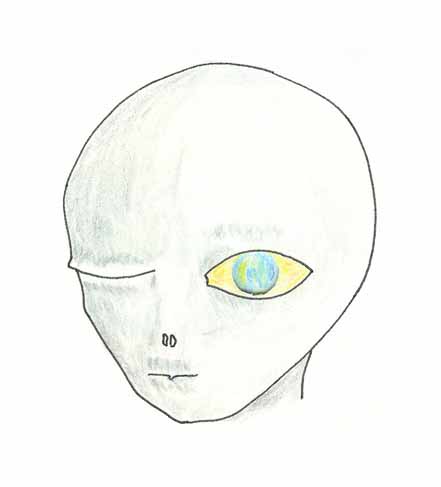 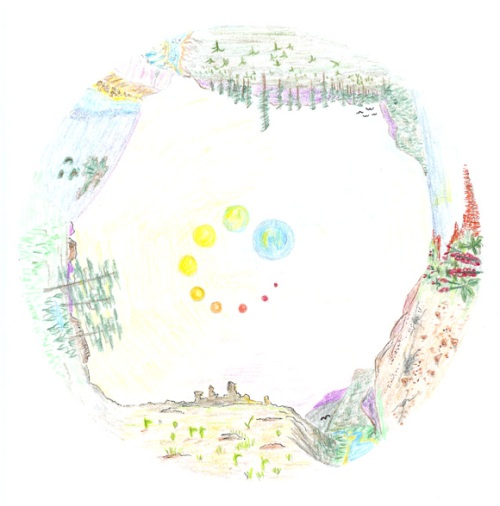 [Drawing, Eye-environments: In the paper version of this study, the page above showing the ‘alien’ head, has a circular hole cut out where the eye is seen. The eye coloration comes from the next sheet of paper (the drawing immediately above)– the centrally located blue planet, becomes the eye of the alien on the preceding page.]
.

It is the purpose of this study to explore some plausible variations in extraterrestrial planetary ecology, particularly that of intelligent life forms.

Our primary environmental building block will include carbon based life utilizing liquid water as a solvent for chemical reactions. These and other limiting factors will be discussed as they’re approached in the text.

Data regarding Earth and the other planets in our solar system have been interlinked providing a basis for this study. In some instances, I’ve extrapolated, in that it was necessary to go beyond the given information to find a set of variations. Elsewhere, the absence of data has caused me to reason out a plausible scheme for variations, amongst environmental elements.
Periodically, you’ll see where I’ve entered the Earth standard or average to intuitively demonstrate the parameter being discussed.

By the time you’ve reached the end of this study: 1) you should have a basic understanding of exobiology and general planetology, 2) you will have a new appreciation of our home planet; 3) you’ll be able to write-up a SRAPO template for a hypothetical model world environment, one that might exist around a potentially habitable star system and, 4) if you hypothesize what an alien ‘looks’ like, you can plug the given characteristics into the SRAPO template and work backwards to  find the type planet and a range of stars which it may have come from.
Keep in mind, Man could probably live, with varying degrees of difficulty, in at least one region on most of the planets covered in this study. Likewise, life in general and intelligent life in particular from these planetary models could survive, perhaps even thrive, in some of the environments found on Earth.

.
The ‘Various Limiting Factors illustration below, sets the basic ground rules, defining the most common conditions under which we might expect to find intelligent life. 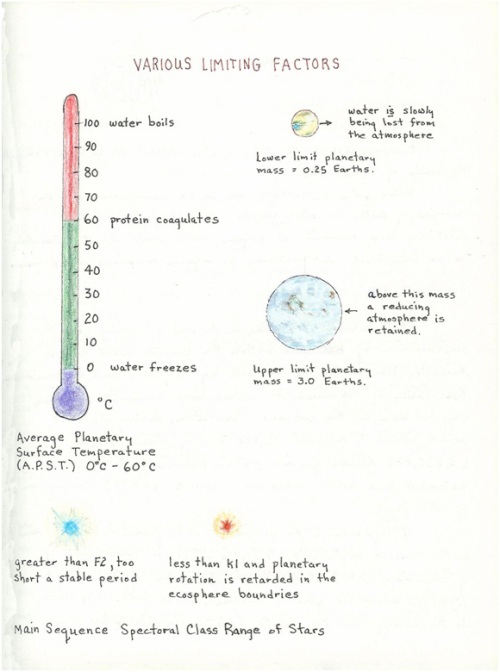