Attempting to determine the basic climatic conditions for our model planets, we will take into account several major variables. We will attempt to treat some of these variables in order to develop an insight into general planetary climatology. You should keep in mind that the approach taken in the survey is a combination of intuition and empiricism and that even current attempts to calculate mean annual temperatures for Earth (mid to late 1960s) have not been highly successful.

Axial Inclination
Axial inclination refers to the number of degrees which a planet’s equator is tilted from its orbital plane.

Since all of the planets in our Solar System display axial inclination, we may theorize that whatever the process leading to its development here, perhaps exists universally. However, since the process isn’t understood, we’ll consider various degrees of axial inclination to develop an understanding of their general effect on a planet’s surface temperature.

Axial inclination, near 0º
On a planet with 0º or near 0º axial inclination, the temperature, precipitation rate and length of day would not vary appreciably in any one spot throughout the year, assuming a nearly circular orbit. circular.

Because the planet has no tilt, there  would be no seasonal change as the year progresses. At any point on the planet’s surface, the  prevailing conditions in January would be the same as  in July. Low latitudes, near the equator, would experience the planets perpetual summer temperatures. High latitudes, nearer the poles would exist in a relative condition of winter with low illumination. On either side of the equatorial summer zone, there would exist temperatures we may classify as relatively spring like. The next zone would be fall like, with temperatures declining as one approached the high latitude winter zone.

Proceeding from the equator toward either pole, you would almost imperceptibly move across the planet’s surface temperature gradients, from relatively hot, to relatively cold.

Many plant species on Earth require a certain number of days with frost, a particular number of hours sunlight or some other abiotic factor to trigger seasonal growth. On worlds with 0º or very low axial inclination, plant life would have made other adaptations to the essentially non varying climate at their latitude. We might expect more sensitive biological triggers and a greater number of species which were perennials and fewer annuals. 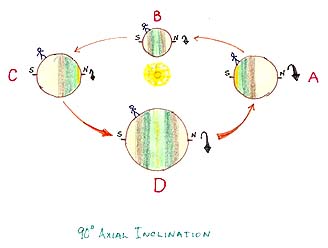 As the planet orbited its parent star, it would alternately have one of its poles bathed in summer sunlight for a quarter year, have a quarter in semi dark winter. Between the long hot polar summer cold winter cycles, the lower latitudes would gradually shift into a regular day and night cycle. The day and night cycle on this model would be complex, with the polar regions growing tropically warm in their seasonal summer and declining to Arctic cold in their seasonal winter.

Note from the preceding diagram that , the planets south polar region is experiencing summer. A few months later having orbited to position B, the polar regions are now located at a point approximately 90º from the sun, therefore are experiencing conditions similar to those at Earth’s poles. Note also that in position A, the “spring and fall” moderate temperature zones on the illuminated side of the hemisphere do not experience night. In these locations, the sun would simply circle in the sky. But it would not set As the planet orbits to position B, the spring  and fall temperature zones acquire a day and night cycle.

As the planet orbited toward position C, the sun would  be seen to rise lower and lower in the sky, the days would shorten and temperatures. At position C, an observer at the south pole would be in several months of cold darkness. Southern latitudes would be in s state of extended twilight. Northern latitudes would be basking under extended periods of continuous daylight. At the same time, the north polar region would be baking in a summer season under overhead tropical sunlight.

Note that between location A and C, the poles experiencing summer and winter have reversed.

If this planet had an APST of 68ºF (20ºC) then a large percentage of the planet’s surface would experience a temperature range from between 81ºF to -25ºF. I would more or less expect tundra type terrain and vegetation on either side of the equator and vegetation specialized for hot and cold temperatures in higher latitudes.

Should such a planet exist in the ecosphere of a F class star, it would have a long year and therefore longer seasons for growth, before dormancy. Migration might play a major influence amongst larger life forms. If the planet orbited a relatively small cool class K star the year would be short and the growing season reduced.

Those of us living in the mid latitudes on Earth (my 1980-2005 home is roughly on 45º33’ north latitude) can attest to the seasonal climatological effects of Earths 23½º axial inclination.

A mid latitude location on a planet with an APST of 20ºC and a 40º-60º axial inclination would be subjected to a steamy tropical summer and a frigid Arctic winter. On small to mid size planets with moderate inclinations, plant life would have developed highly protective tissues against the relative cold and heat. Desiccation and starvation  would be major biological problems.

Warm vs. Cold-bloodedness
Axial inclination and APST are two very important variables in broadly determining whether intelligent life on our model planets are warm or cold-blooded.

Persistent wide variability, periodic extreme oscillations and ‘cold’ or ‘hot’ are conditions conductive to the development of warm ‘bloodedness’. On the contrary, mild and seasonal temperature changes in a warm climate (not hot) are favorable to cold ‘bloodedness’.

It takes more biological equipment to be warm-blooded than cold-blooded; however, the extra activity gained in a hostile environment, apparently make the investment worthwhile.

I’ve worked out the following graphic to demonstrate the gross conditions where I believe we might find the development either cold or warm-blooded life forms.

In the upper portion of the graph, hot temperatures tend to be a limiting factor for cold-blooded dominant life forms. Low and to the left, it is general cold that limits cold-blooded expansion and-or probabilities. Looking up and to the right, we see that warm ‘bloodedness’ is favored as the  planets axial inclination rises, since this increases the summer high and drops the winter low temperature average for each latitude. 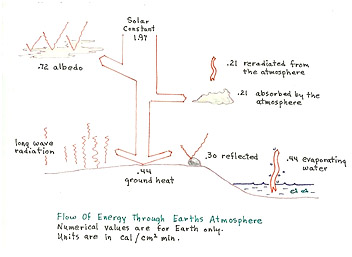 In order to determine evaporation rates, we need to start with the total available solar radiation, make the necessary subtraction for albedo, etc. and thereby find the planets working energy balance.

We’ll start at the top of the planet’s atmosphere with the solar constant, a ‘constant’ because it varies little over a long period of time.

Coming down through the atmosphere, the first quantity of energy we subtract from the solar constant is the albedo, this amount is reflected back into space by atmospheric reflection (from the cloud cover). The remaining energy  is almost entirely used to heat the planet’s surface and to circulate the atmosphere.

In the following table, the percent energy absorbed from the incoming radiation by the atmosphere is shown related to the corresponding planets mass.

Having  reduced the solar constant by subtracting out the albedo and the energy absorbed by the atmosphere, what we have left is the radiant energy actually reaching the planet’s surface. Of this energy, some is lost as long wave radiation and some is reflected. When water or ground moisture is available, nearly all the remaining energy is used in evaporation.

On land, the average precipitation rate is 71 cm (28 inches) per year with about 24 cm (10 inches) lost by river discharge.

The average evaporation rate for land is misleading because it takes into account a large portion of the land surface which contributes little to the figure, for example, tundra, icecaps, deserts and mountains. When these areas are taken into account, we find that the balance of the land receives about 100 cm (40 in) per year, the global average.

On a global scale, total evaporation equals total precipitation, or “what goes up must come down”. The following equation may be used to calculate precipitation or evaporation rates for our model planets:

Factors used in the Precipitation computation See the required data in Table: Data for computing precipitation and evaporation rates, below.

x = Seen at right in the table show the percent energy absorbed at 100% cloud cover, the last two 61% albedo loss only.

The preceding method of determining precipitation rates over the planet’s surface will be modified in the next chapter.